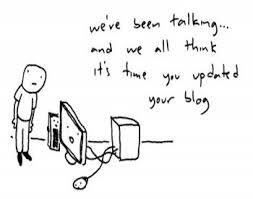 Well, I haven’t been as productive as I had planned on this fancy new blog. I made the big switch and promptly left everyone hanging!

This is not a very good way to get one’s blog thriving in the big bad world of a gazillion blogs. But, I have been writing! If you’re keen to see what I’ve been writing about check out my latest blogs for CBC Sports and the Huffington Post:

Huffington Post: Wake up and Smell the Coal Alberta!

And, please stay tuned, I really do plan on being a better blogger in the very near future…

Well, hello there! Glad you made it over here to the brand new GrovesLine! It was high time to branch out and give the GrovesLine its very own home. Take a minute to check it out and learn more about Kristina and how this blog got its name. I hope you like it and feel free to drop by anytime!

I think even a stone would find this story about Caine’s Arcade endearing.  If you haven’t seen it already — maybe you have as I’ve heard it’s gone ‘viral’ — take a few minutes to be inspired by this little boy, his wonderful imagination and his entrepreneurial spirit. It may leave you feeling a little nostalgic for your childhood or simply hopeful for the future because one day little boys like him will change the world. Either way it should put a smile on your face :)

Recently I learned that I’ve been unceremoniously removed from Schedule B. I didn’t even know what Schedule B was, or that it existed for that matter, until I found out I was no longer on it. At a recent meeting of the powers that be at Speed Skating Canada, where such things are decided, my name was briefly highlighted then swiftly deleted without so much as a sigh, or so I’m told. END_OF_DOCUMENT_TOKEN_TO_BE_REPLACED

It would be safe to say that I never truly excelled at short track speed skating. I used to think I was awesome of course, but if I toss those rose coloured glasses overboard and look back instead with clear, nostalgia-free vision, there is really no doubt about my complete lack of short track talent – it was definitely not my forte. I still did it of course, for many years in fact, while I patiently counted down the days until I could move west and find my true home on the long track.

END_OF_DOCUMENT_TOKEN_TO_BE_REPLACED

I remember clearly the first real speed skating race I ever won. It was at the North American age class championships in Lake Placid, New York circa 1991. It was a long track 800m mass-start race and I won it, surprisingly, beating a group of girls who, until that point, beat me handily nearly every time we stepped onto the ice to race. END_OF_DOCUMENT_TOKEN_TO_BE_REPLACED

One afternoon in May I came home to find an unusual message on the answering machine.  It was from a man who had read a recent article in the paper about me and was calling because he was curious about ‘the Right To Play’.  The article in the paper he was referring to was about a wonderful award I recently won from the University of Calgary – the Graduate of the Last Decade – and it included a little bit of information about me and some of the things I’ve done, including my contributions as an athlete ambassador for Right To Play.

It was an older gentleman calling, I figured him to be in his seventies at least, who had tracked down my phone number and requested that I return his call so I could answer his questions about the Right to Play.  It’s safe to say that I don’t get a lot of strangers calling me with regards to articles about me in the paper, so this was intriguing to say the least.

That night I attended a play with my friend Sabina and told her about the strange message, over which we shared a little chuckle.  She suggested that maybe he was calling because he was a generous old man who wanted to make a sizeable donation to Right To Play.  Up until that moment I wasn’t sure I would call him back, but the prospect of this being true, along with a healthy dose of curiosity, led me to return his call the next day. 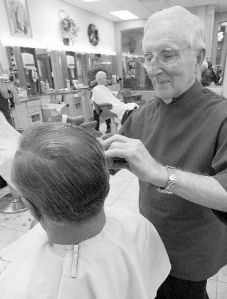 It took a few moments for 91-year-old Phil Streifel to remember that he had called me and what he had called me about, but once everything was cleared up the conversation began in earnest.  After some brief introductions and friendly chit chat where I learned that Phil, the longest serving barber in the city of Calgary, likes to go speed skating at the Olympic Oval during the winter, I eventually brought it around to his questions about Right To Play.  I explained, at length, that Right To Play is an athlete-driven humanitarian organization that uses sport and play as tools for development in some of the world’s most disadvantaged countries.  Working predominantly in African, Asian, South American and Middle Eastern countries, Right To Play has been instrumental in improving the lives of hundreds of thousands of children over the last ten years.

There was a pause, during which I imagined of a dense cloud of question marks forming above Phil Streifel’s head.  It seemed that this was not what he’d hoped to hear.  After this brief silence, Phil began to tell me the seemingly unrelated story about how he had been playing slo-pitch in Calgary since 1971.  He spoke at length about many of the interesting aspects of his 40-year career in the sport of slo-pitch and his previous years in the sport of baseball, including the league he played in, his strengths as a player, the friends he had made and just how much he loved to play the game.

Now, this left me scratching my head as I sat there listening, at my desk, phone in hand, with my own giant cloud of question marks floating above me.  What on earth was he talking about and what did his slo-pitch career have to do with Right To Play or me?  I sat there, staring at the wall, with a furrowed brow, shaking my head and my free hand waving around questioningly.  After several polite ‘uh-huh’s’ and ‘hmmm’s’ and ‘that’s interesting’s’ I wasn’t really sure what to say.

At this point Phil began to tell me about a recent meeting where the Calgary slo-pitch league he played for had held a vote and it was decided that Phil was too old to play and that for his own health and safety, and that of other players, he would no longer be allowed to play the game.  He said, “Can you believe that? I’ve been playing slow-pitch for forty years, and I know what I’m doing!  And now they’re saying I’m too old and I might get hurt! Well, I could get hurt just walking across the street! And I’m good too, I can still move and make plays!”

It occurred to me then, and my heart shamefully sank for just a moment, that Phil Streifel had not called me with the intention of making a sizeable donation to Right To Play, but instead he had called because he thought that Right To Play could help him get back on his slo-pitch team.  My heart broke just a little bit, but I also smiled, as I pictured this sweet old man, until now a complete stranger to me, on the other end of the line, his hopes dashed at the news that this Right To Play was a world apart and three generations away from what he needed.

Once I got over myself and the selfish expectations I’d had, I shared my heartfelt dismay and sympathy and quite frankly, my indignation, at his unfortunate and unfair dismissal from the slo-pitch league.  Should we all be so lucky, not only to live until the age of 91, but also to thrive and endure and play slo-pitch!

I apologized that unfortunately I, and by extension Right To Play, would not be able to help him but I wished him well in his mission to be reinstated as a valued and enthusiastic member of the slo-pitch league.  His appeal was underway and he said if he had to go public to garner support he would.  He also told me the story of a 65 year-old player who was accidentally struck in the head with a ball and ended up with a concussion, and while that was unfortunate, he himself had been playing so long and was adequately spry that such an incident would not likely have happened to him.  I have no doubt this is true.

A number of weeks later I remained curious if he had won his appeal, so I decided to give him a call to find out what happened.  He wasn’t home so I left a message on his machine, one I suppose he might have found unusual.  Still no word back but I hope it’s because he’s too busy out on the field, playing the game he loves, exercising his own right to play.

p.s. for more about Phil Streifel click here and here