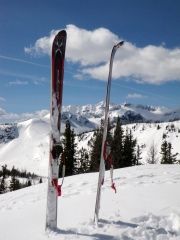 Not a bad place to hang your hat!

One of the best things about retiring from my old job is that it has opened up a wealth of time and freedom to go skiing — a lot.  In the first sixteen years that I lived in Calgary, I went skiing about once or twice a year.  In the two winters since I quit speed skating, I’ve been close to sixty times. It’s so nice to finally be able to enjoy my backyard – the spectacular Rocky Mountains.

Of course I don’t lament all those years I spent not skiing, as I was happily engaged in my occupation at the time, but now that I can get out there regularly, I appreciate it so much.

I was on cross-country skis by the age of two and spent much of my childhood exploring the endless trails in Gatineau Park.
I raced a little, until skating took over at least. And even though I spent twenty-three years speed skating, in many ways I feel more natural on my skis than I ever did on my skates. My Norwegian blood may have something to do with that.

When it comes to gravity-assisted skiing, i.e. down the mountain only, telemark is my M.O. I did very little alpine skiing when I was young and fixed-heel skiing just doesn’t feel right! Probably another Norsk influence…  Tele is certainly tough on the legs, but it feels amazing when you do it right (which for me is mostly only on blue groomers — I’m working on it!) But while there are a lot of things to like about the resorts, like poutine for example, we’ve been hankering to get away from the crowds, lines and high cost of lift tickets.

On Easter Sunday, armed with avalanche safety gear and some new skins for my skis, we made our first foray into the backcountry — a very tame climb up to Healy Pass. A three-hour climb for a six-turn run at the top. I earned two turns per hour of climbing! It was a blissfully calm day, warm and sunny with bluebird skies and best of all, silence. Just us, our skis and a little adventure.

People often ask me if I miss skating. They are generally surprised when I say no. I don’t miss anything about it at all, it was simply the right time. These thoughts never seem to cross my mind anymore, especially not when I strap on my skis and take to the endless white bounty offered by the beautiful Rocky Mountains. 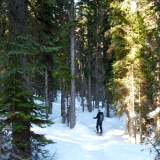 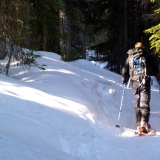 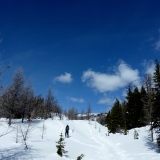 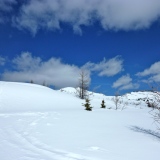 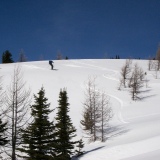 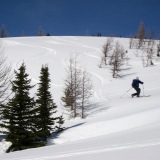 Not a bad place to hang your hat!