Whenever I’m in my car, stuck in traffic or not, I wish with all my might that I was on my bike instead. No matter how windy, rainy or snowy it might be and especially if it’s sunny and warm, I’m instantly jealous of anyone I see riding their bike with vigor and a broad smile stretched across their rosy-cheeked face. If biking is truly not an option I’d settle for the C-Train, so that I could at least let my mind wander or read a book while someone else takes me home.

Other times, when I am commuting on my bike, I secretly laugh at all the poor souls stuck in their cars and wonder why they don’t know just how liberating and wonderful it is to commute by bike.  I relish the wind in my face, the efficiency of my bicycle and the dollars that remain in my pocket as a result.  And I particularly enjoy realizing that for many destinations in the city, door-to-door commuting times by bike are often on par with those achieved by car, especially once you consider finding and paying for parking, then walking from your car to the door.  I always feel glad when I take my bike instead. 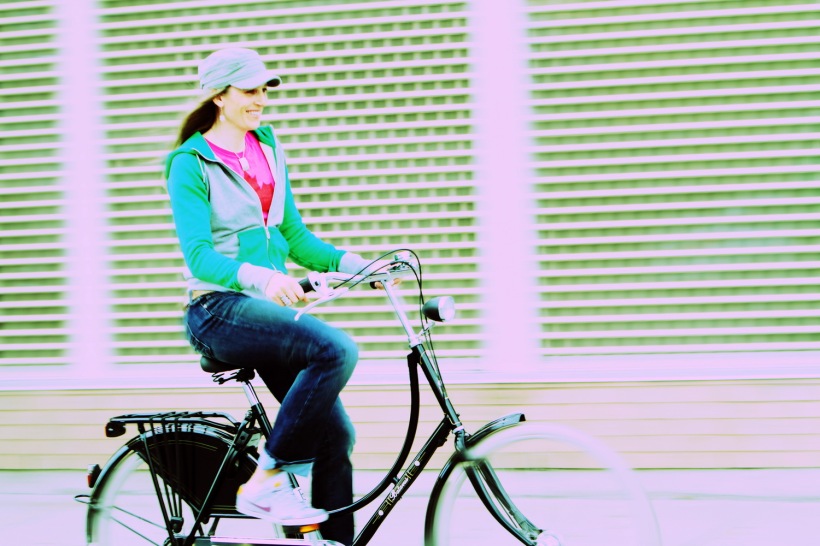 But this is really awesome! I love my bike!

But alas, I’ve lived in Calgary for fifteen years and sadly fallen prey to the myth that cars provide freedom and that one needs a car to survive in this city.  I’m not the only one – this is a city driven by cars and by the attitude that a car is the only option available to transport oneself.  And yet I don’t know a single person who loves, or even likes, driving around the city, but we all seem to do it without question.

Why do we mindlessly accept what is deemed a necessary evil when so many have discovered otherwise? Sure there are status, social norms, personal choice and comfort to consider but the notion that cars equal freedom is a grand illusion.

I will admit, that in a land as vast and ambitious as Calgary, in fact its land mass covers over 5,000 square kilometers making it the single largest metropolitan city in North America, it is necessary to have a car in many circumstances.  Getting to the airport, for example, or to the mountains, or to some obscure specialty shop tucked away where no train or bike path goes.  But if you simply change the way you think, you will realize that in the grand scheme of your busy day there is more than one way to get from your usual A to B.

This is better than you think…

A couple of months ago I took the train to an elementary school for a presentation that was ‘way’ down south.  It took almost one hour to get there.  During that hour I read the news on my phone and read a chapter of my book.  At that time of day, in traffic, it would have taken me at least 45 minutes to drive.  But I also would have spent at least 15 minutes in the morning reading the news online at the kitchen table.  The end result was the same – I reached my destination and read the paper in a total of one hour, only how I got there had changed – no stress, no traffic jams, no parking to find or pay for.

In fact I’ve often driven somewhere in this city only to realize when I get there that I could easily have taken my bike or the train instead.  Too often I’ve let myself slip into the city-made trap of believing that taking my car is faster or better.

Even though I happen to be fairly environmentally conscious, what I’m advocating for here isn’t radical environmentalism or activism or trying to save the planet – although those are all noble pursuits – but rather a mind shift in how we live our lives and that an alarmingly simple change in the way we structure our time can drastically improve our quality of life.  Save money, get exercise, reduce stress, have fun, be outside, simultaneously! How can anyone convincingly argue against that?

Of course there are so many reasons not to do it… kids, distance, weather, lack of bike skills, too hard, not enough time, getting sweaty, looking like a geek… There will always be reasons not to do something, even something as simple and efficient as riding your bike to work.  It’s a shame that we get so sucked in by convention as opposed to common sense.

A few months ago I met an optometrist who lived less than a ten-minute walk from his office.  He chose to drive to work every day – on purpose – even though it took him longer than walking, for the sole reason of not wanting to leave his expensive car sit unused in the garage all day.  I cannot think of anything more ridiculous than that, including me showing up to an appointment in spandex shorts and cycling shoes. 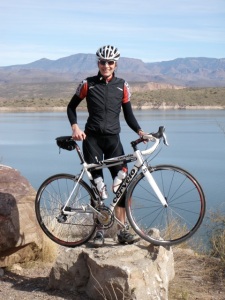 Geek, yes, but look at the smile on my face!

It’s true that I look like a geek in my cycling gear, even more so when I stop at the grocery store on the way home and walk around with my helmet on. But you see I spent twenty-three years racing on long blades in a full spandex suit with a hood, so obviously I don’t have a problem with looking like a geek. Somehow I’d rather look like a geek than waste an hour of my day sitting behind the wheel of a fabricated illusion of freedom, only to go park it at the gym and sit on an indoor stationary bike under the pretense of time well spent.

Of course I still drive places, but a lot less often than I used to.  It’s not always easier or faster to take my bike and it does require a little bit of extra preparation.  Riding up the steep hill on Home Road into a headwind is tough and sometimes I grit my teeth to make it to the top.  But life wasn’t meant to be easy, it was meant to be good. And good is about shifting the way you see things to discover that getting from A to B on two wheels can mean gritting your teeth and smiling at the same time.

5 thoughts on “Mind Shift: Your Daily Commute — Be a Geek!”