Back in the familiar surroundings and relative comforts of my own home, it’s hard to imagine that the week I just had actually happened and that it wasn’t a dream or some crazy trip to an alternate universe. It’s remarkable how quickly we can become reacquainted with our own normal lives after otherworldly and eye-opening experiences.

Regardless of where I am sitting now however, I am not entirely the same person I was a week ago, as we all are not, having lived through another seven days and evolved, to a greater or lesser extent, into someone just a little bit older and wiser, for one reason or another.

For me, that reason is the experience not of visiting a parallel universe, but rather witnessing my own little universe expand exponentially, as I move farther away from the confines and structure of high performance sport.

My week began with three days of surprisingly intense work at the CBC, preparing and then calling the races from the Short Track Speed Skating World Championships in Shanghai.  This is still high performance sport – yes – but television is a planet unto itself, on which I often feel like a visiting alien. Thanks to the date line and time change I could watch all the races beforehand, analyze in advance and prepare notes so as to hopefully sound smarter than I actually am when the time came to go air.  Even still, live-to-air is pretty stressful and the hour whizzed by in a snap.

That early morning was scarred by the tragic news that another Canadian skier had died from a crash at a ski cross World Cup.  While the world of television scrambled to adjust the programming, I found myself struggling to comprehend what had happened and mourning the loss of someone I didn’t know.  Knowing that my good friend, and high performance director of the Canadian ski cross team, Dave Ellis, was in the throes of a great personal and team tragedy made it difficult to concentrate on the task at hand.

Dave’s best friend – my boyfriend Scott – grew up skiing at the Craigleith Ski Club north of Toronto and was coached by Nik Zoricic’s dad Bebe for many years.  He remembered a little Nik ripping around the ski hill, and he could tell back then that Nik would one day be a world-class skier.  This personal, albeit distant, connection to Nik’s death and the raw, inexplicable circumstances of the crash made me feel so sad.

I hate it when people say ‘the show must go on’, but that day I had to get out of my own head and do my job.  After wrapping up the Sunday show I rushed to the airport to catch a flight up to Sudbury for a whirlwind four-day field visit with Right To Play to learn about the new PLAY (Promoting Life skills in Aboriginal Youth) programs that began six months ago in 39 First Nations communities around Ontario.

When I found out that Right To Play was working in Ontario with Aboriginal youth I immediately felt the urge to visit and learn more.  All we tend to hear about First Nations communities in Canada is bad news, most recently with the plight of the people from the Attawapiskat First Nation – and with good reason – it is a national tragedy that has been ignored for far too long.

But I wanted to go and see if Right To Play could have the same positive impact there as they have had in so many other places around the world, using sport and play as tools for development in hundreds of thousands of disaffected youth.  Maybe this would finally be a bit of good news for the First Nations people of Canada.

In four short days I learned a lot about a lot of things, which, to sum up, doesn’t amount to much.  I learned that you cannot learn about the complexity of an issue like this in four days.  If anything, I was simply exposed to a tiny snapshot of the history, tragedy, desperation, opportunity, resiliency, and now hope, of the First Nations people in Ontario. 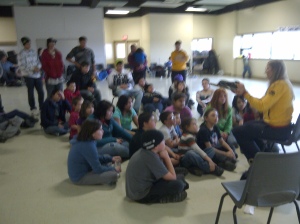 I talked to Aboriginal youth in Nipissing and Sheshegewaning First Nations about the Olympics, my experiences as an athlete and tried my hardest to teach them how to skate.  I was stressed to the max watching these kids rip around the ice without helmets (a cause that I failed miserably to implement) and optimistically tried to get them to do speed skating drills when all they wanted to do was not do speed skating drills.  I was inspired by the few who were keen to learn, and confused by those who were afraid to. Amidst the chaos I wondered to myself if I had made a mistake in being there, talking to kids about the Olympics and trying to teach them to speed skate when they had no hope of understanding my life, in much the same way I had no hope of understanding theirs. 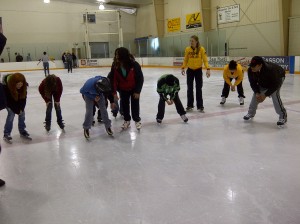 After the skating session in Sheshegwaning was over I felt unbelievably relieved that no one had fallen and cracked open their head.  And I was totally unsure of what I had accomplished, if anything at all, by being there. When the Right To Play staff later debriefed about the events that day I was surprised to hear how positive they were and that the kids had been so amazing.  From where they had started in October last year, it was a giant leap forward that the kids had shown up at all, that they had paid attention for ten whole minutes and that they had gotten on the ice to skate, with smiles no less.  It made me realize how unrealistic my expectations had been, and just how challenging it has been to get this program off the ground.

A trip like this one deserves a great deal more than what I’ve written here and I will soon give it its due. But for now I am simply digesting the week that was, the one that was eye opening, heart crushing, heart-warming and world expanding, where I lived through a stressful job, the death of a fellow athlete, and a glimpse into the complex lives of Aboriginal youth in Ontario.  It was a week where I learned that life is not just going in circles as I’ve often joked it is. But rather that it is constantly expanding, as is the infinite universe we inhabit, and that through this expansion we simultaneously experience all that is wonderful, strange and hard. 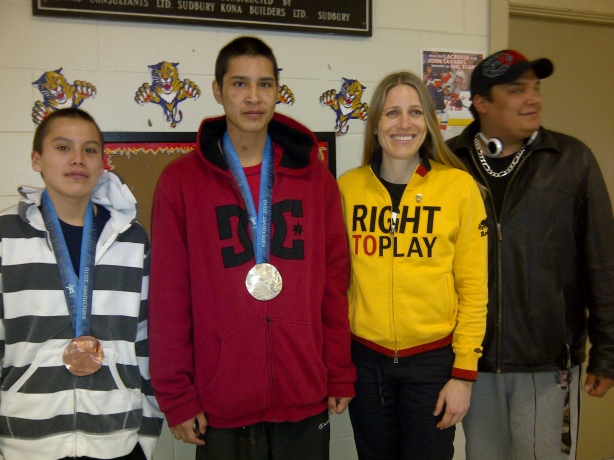 5 thoughts on “Life is Wonderful, Life is Strange, Life is Hard”