I’ve been singing this song a lot lately. I can’t even look at the words without singing it in my head. It pretty much sums up the last two months of my life: summertime and the living is easy.  Every once it a while I randomly belt it out at the top of my lungs… fish are jumpin’ and the cotton is hi-iiigh… Can’t you just hear it? I really like to draw it out, make the words last forever. I don’t think Scott appreciates my singing as much as I do, but that’s his problem. 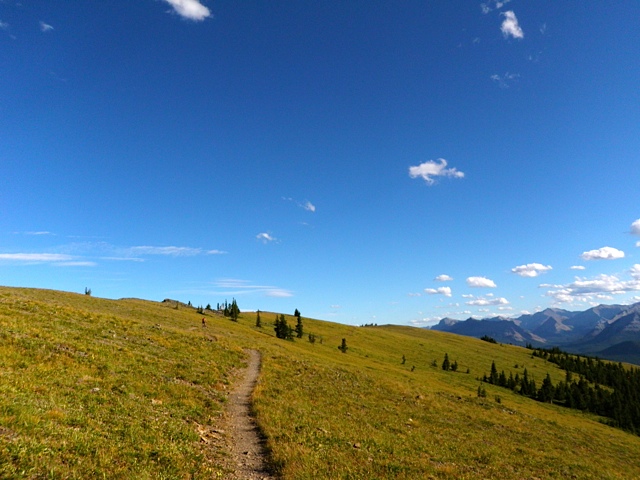 In case you hadn’t heard, we got summer here.  Here, as in Calgary, Alberta, Canada. It’s true! It was a little late in coming, but once it finally came, it came full on.  It’s still here in fact. Today is September 9th and it’s 29 degrees, nary a cloud in the sky.

I’m not sure if it’s the first time I’ve simply noticed the summer weather in a while or if it really has been an exceptionally good summer.  Probably a little bit of both. Instead of doing lowwalks with my head down all summer I actually did fun summer things this year like camp, ride my shiny new mountain bike, hike, pick strawberries, make jam, cruise on my Dutch Oma bike for ice cream and jump off the dock repeatedly at the cottage, and somehow the whole time the sun never seemed to find a cloud to hide behind.

That makes it sound as if I didn’t like lowwalks very much, which isn’t exactly true, but lowwalks are really really hard, not to mention hard on my back! I did enjoy them in a masochistic kind of way, but in all honesty the respite from such a difficult, not to mention strange looking, speed skating exercise has been good for my summer.

Scott and me hiking up to Picklejar Lakes

I still have the odd day where I feel like a tiny pile of garbage, like maybe just a banana peel and some coffee grinds, but generally, thankfully, I feel like my concussion days are behind me. That doesn’t speak much to what kinds of days lie before me but let’s save that for another day.

This summer I discovered that I really love mountain biking. I’ve tried it before but never did it often enough, or for long enough, to get past my complete lack of skill or fear for my life and limbs. I’d also never ridden a bike with rear suspension, which, it turns out, is a bit of a game changer. I suspect that twenty years of road riding all summer has left me looking for a change of pace, but choosing its riskier sibling, mountain biking, after sustaining a concussion in November, is probably not the wisest thing I’ve ever done.  Thankfully, I also discovered that there is no shame in walking.  If I can’t do something or feel it’s too risky, I just get off my bike and push it.  As my skill level has increased, the fine line I walk between what is risky and what is not has blurred ever so slightly, but fortunately my ego can sustain the forgoing of a big drop on a gnarly descent because I remember all too well that big pile of garbage. 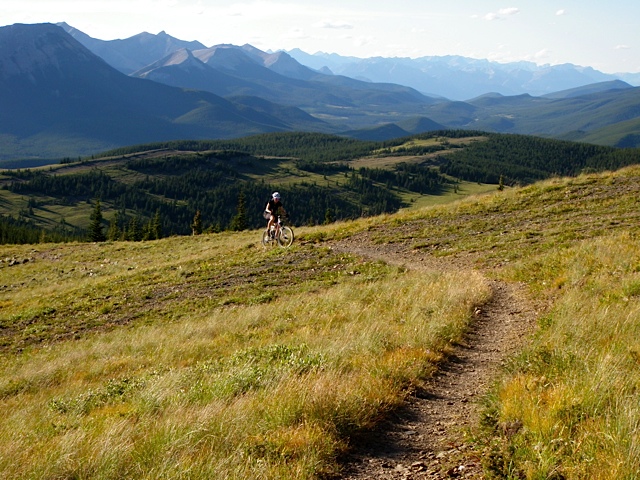 Climbing up the beautiful Powderface Ridge

Every year for the past number of years we’ve been invited to join some friends on a mountain biking trip in the Chilcotins. For the uninitiated, i.e. me, the Chilcotins are well known in the mountain biking world as one of ‘the’ places to ride. The Chilcotins are a mountain range in the B.C. interior, about an hour west of Lillooet, laced with endless single track trails in alpine and sub alpine terrain. Each time we were invited I’d have to decline (note the switch from ‘we’ to ‘I’… Scott could have gone every year, but I would always be deep in the throes of intense, and un-missable, summer training).

But this year was different. Now past the concussion and taking a break, I jumped at the chance to finally whet my mountain biking chops (or lack thereof) in the Chilcotins. I’d been sufficiently primed for the difficulty of the trails by Scott’s friend Dylan, and while excited about riding, I knew I would be in a little over my head. Turns out I wasn’t half bad and by hour five on the big Windy Pass ride I felt like I could fly on two wheels. Letting go of my fear, tempered with my increasing skill level and the sheer beauty of my surroundings, led to the most liberating sensation I’ve felt in a good long while.

I think that’s why I keep going back. While my road bike gathers dust in the basement, I choose to hit the trails instead, whether out to Bragg Creek and the beautiful Powderface Ridge or just down the street from my house to the bluffs along the mighty Bow River. I love the challenge of doing something new that I’m not very good at and the sense of accomplishment from simply riding up a hill that before I had to walk up. I’ve had my fair share of ‘holy sh*t’ moments, enough to maintain a strong sense of fallibility, and enough that I signed up for a skills course this weekend at Canada Olympic Park. The forecast? Sunny and 25 all weekend.

It’s been a luxury for me to have this time to do all the things I’ve sacrificed for so many years. The past two months the living has been easy. I’ve probably done more little adventures in the last two months than in the last five years combined. I’m free to do as I choose on what has essentially become a months long vacation. Of course the last 23 years have been one giant adventure too, but this unexpected hiatus, while initially unpleasant and unwelcome, has breathed a flush of fresh air into my life and rejuvenated my spirit.

It’s true, and inevitable, that this glorious summer will end sometime, even though today it feels like it will last forever. I’ve packed in as much as I could but soon it will be time to put the bikes and tents and sleeping bags away for the winter. Today though, I still hear the words of Summertime floating melodically, repeatedly, through my mind… One of these mor-niiiings you’re goin’ to rise up siiiiing-ing…then you’ll spread your wiiiiiings and you’ll take the sky-yyyyy…

A nice way to start the fall, don’t you think?

3 thoughts on “Summertime… and the living is easy”