1. condensed water vapour in the air at or near ground level

2. something that serves to obscure or conceal

3. a state of mental confusion or unawareness; daze, stupor

Taking off in the rain

There are times when you take off in an airplane and it is wet and drizzly outside. I’ve been to the Frankfurt and Amsterdam airports enough times to know this is true. It doesn’t seem to matter where you’re flying to really, or what the weather is like there, but it’s always rather nice to fly away from a foggy, rainy place, like you’re leaving a mess behind. As the plane lifts off the ground, drops of rain stream nearly horizontally along the small window. The clouds outside look dense, heavy, inescapable even.  In fact on days like that it can seem like it is quite impossible that there could ever be anything but cloud. As the plane gains altitude towards the approaching cloud ceiling I tend to brace for the moment I’ve learned to expect:  the sudden onset of turbulence as the airplane first hits that huge mass of water vapour.

Into and out of the fog

At that moment, the plane shakes and is instantly engulfed in a thick fog.  The view of the ground disappears and one loses all sense of space, even time.  Sometimes the stratum of cloud seems to go on forever, like the plane is flying through a massive pile of massless mashed potatoes.  Then every once in a while there is a tiny flash of light or quick glimpse of the ground that reminds you of where you are and what you are doing. The climbing plane flies through alternating patches of fog and hints of sunshine, bouncing around between the two at irregular intervals.  Once in a while it looks like you’re out of the fog and you feel the warm sunshine on your face and see the clear blue sky. But just as quickly the plane hits another patch of cloud and it all disappears.

Then, finally, there’s a moment when the plane bursts through the mist and all of a sudden a glorious expanse of soft, puffy clouds recedes beneath you and the sky becomes so clear and blue you wonder if you’ve ever really seen it before. It can kind of take your breath away, especially when it sneaks up on you, like if you’re not paying attention, fiddling instead with your headphones or scanning the duty free catalogue… but once it happens you can’t help but look out the window and, if you’re like me, be swallowed up by a sense of awe.

If you’ve ever flown before you’ve likely experienced this very thing, or at least you can imagine what it might be like.  And I suspect you might also surmise that what I’m actually describing here is My Life As I Currently Know It.  I have flown here and there in recent months and literally experienced this, but what I’m referring to really is a figurative description of the past few months of my life. The metaphor works on a couple of levels: 1) in reference to my state of mind over the course of this season and 2) as an abstract account of the concussion healing process.  It is not a particularly brilliant realization per se and clearly has nothing to do with the massive amount of time I have on my hands these days to think of such things. Also, please excuse the following obvious and excessive use of double entendres, but it entertains me so just go with it. 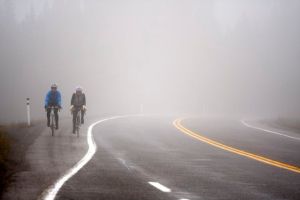 In September we went to Canmore for a training camp.  Instead of dealing with the hassle of travel we opted for the simple choice of driving to the mountains for some long rides and fresh air. Unpredictable weather found us riding for hours on end in fog, snow, sleet and rain.  It was cold and wet, and surprisingly fun.  I enjoyed the riding, a lot.  But in the fog I didn’t really know where I was going, where I would end up or why I wanted to go there in the first place. Lost in the fog of my own mind, I found myself literally lost in the fog on Highway 40.

Having begun the post-Olympic season out of habit and based on the assumption that I should just want to because I always have, I didn’t listen to the little voice in my gut whispering softly to me that “maybe you should just rest a while…”  Typically, such advice from my own self fell on deaf ears and I forged obstinately ahead, confident that the spark would return; that the fog would lift.

So I got on the plane, literally and figuratively.  The thing about getting on a plane is that you automatically make the unconditional decision to temporarily put your life into the hands of other, more qualified individuals like pilots, mechanics and air traffic controllers.  And, once you get on there really is no getting off until the plane touches down.  Even when you realize mid-flight, as I did, literally and figuratively, that you don’t really want to go where you’re going, you absolutely cannot get off the plane until it lands. But I digress.

At the first World Cup in Heerenveen, where it is always wet and drizzly, I found myself standing on the starting line in my races with giant, foggy question marks floating above my head, raining down on me as the gun went off. As I took off  the raindrops streamed horizontally across my glasses and I couldn’t really see where I was going. At the next World Cup in Berlin the rain had stopped but the clouds hung expectantly low.  In the team pursuit race, going down on a chunk of brittle ice, I finally hit the approaching cloud ceiling, you guessed it, literally and figuratively. My brain shakes and I’m instantly engulfed in a dense fog. Conclusion: concussed. 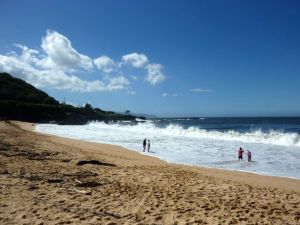 Many turbulent days followed and at first I was flying through an endless pile of massless mashed potatoes. Then one day in the shower a moment of clarity flashed through my mind and I finally heard that little voice in my gut, now screaming at me, ‘for the love of all that is good and pure, just STOP!” The wave of relief that washed over me was so liberating I promptly went to my computer and booked a ticket to Hawaii to join Scott and the swim team on their winter training camp. There I discovered an inner beach-self I didn’t even know existed.

Today I’m still climbing through alternating patches of fog and hints of sunshine, bouncing between the two at unpredictable intervals.  At one point I thought I was in the clear and briefly felt the warm sunshine on my face.  So I went cross-country skiing and literally felt the warm sunshine on my face. But, typically, ignoring the little voice in my gut, I jumped the gun and hit another little scrap of cloud. Bummer. Now, having learned my lesson, I am resolutely determined to wait it out for the moment when I will burst through the last bit of fog, watch the clouds disappear beneath me and see the sky so clear and blue it’s as if I’m seeing it for the very first time.