When my dream of running a leg in the Olympic Torch relay finally came true after 22 years, I was so excited about the actual experience of running with the torch it never occurred to me that I might get to keep it.  As details trickled in about the run, I learned that for a mere $400, and $60 for the stand, I could buy my torch and keep it forever.  A quick glance at the price tag and I dismissed the idea outright, I didn’t care so much about the actual torch, I just wanted to run.

But when I mentioned this in passing to a few people, they were shocked.  ‘You have to buy it!’, they all exclaimed!  ‘It’s a once in a lifetime chance, how can you not buy it?’  Thus, I was quickly convinced otherwise, and decided to buy it after my friends at Agenda Sport Marketing said they would buy it from me and do something special with it.  Then the light bulb went off.  Of course!  I could buy it and do something special with it!

So I bought it, but with no intention of keeping it whatsoever.  The wheels started turning…  I imagined the many possible opportunities that would enable me to donate the torch to a special cause and help raise money for something I cared about.  I determined some criteria:  the event had to have the right audience (read: attendees with deep pockets), the right cause (preferably within the sport realm) and the right platform to tell the story behind why the torch was so special to me.  It also had to happen relatively soon, for two reasons: 1) so as to capitalize on the ongoing buzz surrounding Vancouver 2010, and 2) so as to avoid getting attached to it and changing my mind about donating it.

Since my run with the torch, it has remained dutifully on display in the living room, and later in the basement, with its Olympic flame soot fully intact.  A quick google search reveals that the Olympic flame represents any number of things; purity and the endeavour for perfection, the positive values that man has always associated with fire (ritual, light, warmth, cooking, protection, creation), its symbolism among Greek gods, and the list goes on.  In the modern Olympic era I think the flame represents whatever you want it to represent.  For me, it simply represents the Olympic spirit: global unity, peace, joy and the honourable pursuit of victory.

Looking at the torch certainly conjured up images of my big day, and the intense, pure joy I experienced while running in the relay.  But to me, the thing about the Olympic flame, and by extension the torch, is that it is meant to be shared and passed on.  I can conjure up those images anytime, anywhere, and forever looking at it or keeping it will never change the fact that I had my wonderful torchbearer moment.

As it turns out, just the right event for my idea to be realized recently came to pass:  The Inspiration Nation gala celebration in support of the Canadian Sport Centre Calgary.  I have been the recipient of endless valuable sport (and life) services provided to me by the CSCC for nearly 15 years.  From sport science, sport medicine, physiotherapy, strength training, public speaking workshops, career planning seminars and education assistance, to computer access, business cards and even vitamins, the CSCC has made very tangible contributions to my successes in speed skating.  Considering what the Olympic flame represents to me, and the potential value of the torch, I jumped at the chance to donate my torch to Inspiration Nation as a small way of saying thanks and a big way of hoping for continued support for Canadian sport.

There was a bit of concern from a few camps that I might regret making this donation.  Not in the least.  My only concern was that it might not generate a bid big enough to make the donation worthwhile.  I thought that if it could garner at least $5000 it would be worth it, but anything less than that and I would find it another home.  The fact that there were 12,000 torchbearers and that the bulk of those who bought their torches would likely choose to keep them, I figured it would be a rare opportunity for someone to buy one, and thus incur a pretty bidding war.

The day I ran with the torch I heard many inspiring stories from the Torch Relay staff about torchbearers and their torches.  One I remember clearly was that of a young torchbearer in Manitoba who could not afford to buy his torch, but keenly wished to have it.  A fellow torchbearer on the bus with him that day quietly handed over his credit card and bought it for the young man.  Tears flowed all around.  That was his way of ‘passing it on’.

At Inspiration Nation I had the chance to get up on stage and recount my Olympic torch story. I hoped that if people knew just how special it was and how much it meant to me they might bid just a little bit more.  As it happened, there was a tiny little voice in the back of my mind while I was up on stage that said, “What are you doing?  Grab that torch and get the hell outta here!”  I paid it no mind.

So my torch has found a 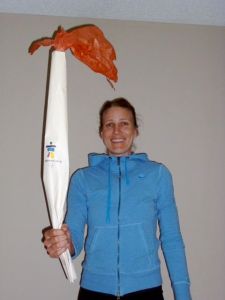 new home and I couldn’t be happier.  But, here’s the thing:  I have another torch!  And how did this come to be?  Well, I did a presentation at a school in Calgary this past April, and prior to my talk some students staged a mini torch relay around the gym, passing a torch from one student to the next, and finally finishing with a student handing it to me.

The torch was made out of paper, rolled up and stapled together.  It has red, flame-esque tissue paper taped to the top and the Vancouver 2010 logo hand-drawn on the front.   I melted just a little (okay, a lot) when they handed it to me, and I instantly thought to myself, ‘now THIS is the torch I am going to keep forever.’  It might not be as durable as the ‘real one’ and it never burned with the actual Olympic flame, but I’m pretty sure what it represents is eternally indestructible.