I had a dream the night before the torch relay run that I messed it all up.  I dreamed that I forgot to go to the meeting place and just went to my starting point and ran anyways.  The leg that I ran was a dirt path and I had to cross a major road to finish it.  I also dreamed that I accidentally let the flame go out and disappointed everyone.  When I woke with a start at 4:30 am it was a great relief to realize it was all just a dream.

Just a dream.  A dream come true that is!  Fully awake and really really excited I left the house at 5:20am and made it to the meeting place at City Hall on time.  The group of 20 with whom I would share this day  slowly trickled in, decked out in red mittens and white track suits.  After being given instructions on how to run with the torch we all introduced ourselves and shared why and how we came to be torchbearers.

I was delighted to discover that Frank King, the main man responsible for bringing the 1988 Olympics to Calgary, was in the group.  It was fitting, to say the least, that he was there, considering that I began my own Olympic journey because of those Games.  And now here we were together, both fulfilling life-long dreams of running with the torch.

We were herded onto the bus that would take us to our individual starting points.  People had started to gather in the streets and the joyful mood on the bus increased with each passing moment.  As the bus pulled away one torchbearer in the group declared, “We are all going to sing ‘O Canada’ RIGHT NOW!”  So we obliged and belted it out at the top of our lungs.

Everybody show me your mittens! Big smiles all around.

We sang and cheered and high-fived when the first person got off the bus.  I was number 16 of 20 to get dropped off.  As we drove down Stephen Avenue Mall, and then onto Kensington Road, we saw that many people lined the sidewalks, all waving flags and signs and cheering.  I was pleasantly surprised to see that so many people came out to see the flame.  I figured that it would be too early and too dark and too cold for crowds to form.  I mistakenly and shamefully underestimated the spirit of this former Olympic city.  Good thing too, because as we drove on I worried that there would be no one along the route during my leg as it was in a residential area, but I was proven wrong again!  Kids and families and people just excited to see the flame lined the streets.  I spotted quite a few vintage 1988 Calgary Olympic jackets, in pristine condition, worn with great pride.

Then it was my time to get off the bus!  I was greeted by a few friends and family and many joyful, happy people.  Such happiness everywhere.  I think my perma-smile started before I got off the bus, but I became aware of it when I first stepped out and everyone cheered.  It lasted all day, and then some.

We goofed a little on the video camera, so there is only this of me getting off the bus!

Mitts. Check. Outfit. Check. Torch. Check. Now somebody get me a flame!!

Okay, you can touch it, but I'm not letting go!

Come on baby light my fire!

I was told by many to savour the run, to enjoy it, to take my time.  I even told myself to take it all in, to cherish every moment.  Turns out that is a lot of hooey.  By all accounts, the second my torch was lit, I took off like a rocket.  I don’t recall doing this,  but it was as if I had lit my feet on fire too.  I just wanted to RUN!  Like a kid, I ran with no real appreciation for what I was doing.  I ran off without a care in the world.  No thoughts, no ‘moments’, just running with the Olympic Flame.

The only thing I remember is looking over to a small skating rink on the side of the road and seeing a little kid skating around with his hockey stick.  It was still completely dark out, and I could barely see him but I thought, hey kid, I’m running with the Olympic flame here and you’re totally missing it!  But then I realized he was just doing that same thing that I was, having fun doing what he was doing, just because.

Afterward I thought to myself, oops, it was over so soon, I shouldn’t have run so fast!  What was I thinking?  But in retrospect, the best thing about it was that I wasn’t thinking at all.  I just ran, smiling from ear to ear, and then it was over.  I don’t think I would have wanted to do it any other way. 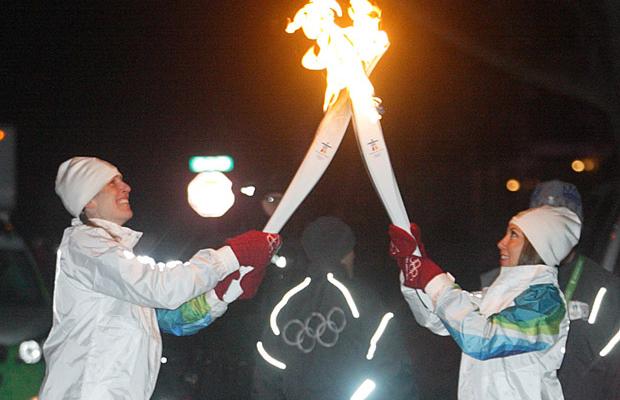 Back on the bus I was greeted with more and more cheers.  We picked up the last of 20 runners and headed back to City Hall, sharing stories and laughs and smiles.  Frank King peppered us with anecdotes from 1988, and reminded us of just how powerful and engaging the Olympic movement really is.  More countries belong to the Olympic movement than to any other organization in the world, including the UN.  And he also said this of Vancouver 2010:  it’s the only time that so many Canadians will be so happy about the same thing at the same time.  How often can we claim to experience that?  Collective and unwavering joy is what we all shared that very morning, and hope to share again and again and again.

The soot of the Olympic flame is all that is remains on my torch.  It only burned for a few short minutes,  and thanks to the trusty and attentive Torch Relay workers who disengaged the gas fitting, it will never burn again!  Thankfully, the smile that comes to my face when I think of running with it will last me a lifetime.  ;)