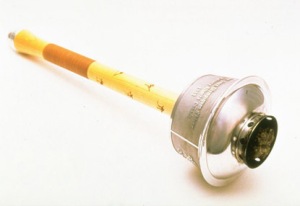 Maybe the letter just got lost in the mail – for 22 years.  It was the letter that would inform me that I had been chosen to run in the Olympic Torch Relay for the 1988 Olympic Winter Games in Calgary.  I waited so desperately for that letter, all the way back in the fall of 1987 when I was just 11 years old, but it never came.  I had been so sure it was coming.

For those who don’t know, that is where my whole Olympic dream began; when we stopped for gas and I saw the sign… I wanted to run with The Torch (posted in Grovesline archives October 2006).  Even now, after all these years, I’ve never been able to pinpoint just why I was so captivated by the idea of running with the torch.  I suppose something about it inspired me and the thought of running with the Olympic flame, lit by the rays of the sun in Greece, expanded my little world just enough to understand that there was something out there powerful enough to bring people from all corners of the globe together to celebrate sport in peace.  That, or maybe I just thought it would be cool to run around with a flaming stick full of gas.  Whatever the reason, I sure wanted to run in that relay and was pretty disappointed when I never got the chance. 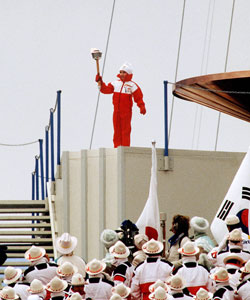 I remember watching the opening ceremonies and physically turning green with envy when I saw that young, 12 year-old girl, not only run with the torch but climb up all those stairs and actually light the cauldron that would burn with the Olympic flame throughout the Games.  Remember her?  I wanted to be her!  I guess it wasn’t my time… The silver lining in that cloud of disappointment turned out to be discovering the sport of speed skating during those 16 days in February of 1988.   For that I am truly thankful.

But life has a funny way of working out somehow.  The torch story has legs again.  Now, all these years later, the letter has actually arrived!  Along with a toque, mittens and my very own official Olympic Torch Relay track suit.  And the letter did start with the words, “Congratulations!  You have been chosen…” just like I thought it would.  It seems that now, after 22 years, I will have my chance to run with the torch.

On January 19, 2010 at 7:37am, I will light up my Olympic torch with the Olympic flame.  I have no idea what to expect, and for that reason have not followed the route closely thus far.  I don’t want to know what to expect – I just want to experience and enjoy it.  To come full circle on this childhood dream is a testament to the mysterious and wonderful surprises life holds in store for us.   Perhaps now that I am old and wise I will be able to appreciate the moment more than I would have as a young, clueless kid.

For 300 metres I will simply bask in its warmth, spirit and celebrate everything that the Olympic flame and torch relay represent.  And/or have a blast running around with a flaming stick full of gas!

3 thoughts on “The Letter Arrives!”